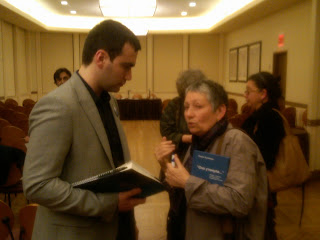 (Ludmila Ulitskaya and Pavel Khodorkovsky)
Ludmila Ulitskaya is a best-selling Russian novelist whose book, “Daniel Stein, Interpreter,” was recently translated to English. On Tuesday, April 5th, she spoke to an audience of about 100 Russian and English-speaking attendees at Columbia University.
According to Overlook Press’ website, “Daniel Stein, Interpreter” is about a Polish Jew who survives the Holocaust by acting as a translator for the Gestapo. When the war is over, he converts to Catholicism, becomes a priest, and then moves to Israel. The character of Stein is based on Oswald Rufeisen, who was known as Brother Daniel. The compelling story was the winner of the Russian National Literary Prize and the Simone de Beauvoir Prize.
Due to its religion themes, the book has garnered criticism from different groups associated with Judaism and Christianity. Russia also has a spotty past when it comes to the Jewish community. Ulitskaya said this occurred because people were uneducated about the origin of Orthodox Christianity. For example, she heard two old women arguing whether Jesus was Russian or Ukrainian, when it’s well-know that he was Jewish.
In the more tolerant Israel, where Brother Daniel lived, services are given partly in Hebrew even at Orthodox Christian churches to make sure that everyone is included. In Russia, that is not the case.
“Daniel Stein, Interpreter” is Ulitskaya’s fourth book translated into English. The successful author said she writes for herself, but is glad that people have been so receptive of her work. Russian journalist and screenwriter Alexandra Sviridova asked Ulitskaya what the appeal of her book was for an American audience, and the author replied that that was a question for an advertising agency. She explained that she does not know American audience and her books have an absolutely different appeal in every country.
The author recently published a book of correspondence between herself and former member of the Russian oligarchy Mikhail Khodorkovsky called “Mikhail Khodorkovsky: Articles, Dialogue, Interview.” He is now in prison and she said the government is preparing his next, third, trial. She said that while behind bars, Khodorkovsky has had an incredible spiritual growth. Ulitskaya added that he would be an incredible Russian leader given different circumstances. Although it’s been said that she should publish another book containing his letters, she said she doesn’t want to do anything that might harm him.
To gain feedback of her work before they go to print, Ulitskaya reads from her books out loud to her husband (who doesn’t like to read), and sends manuscripts to very few friends. Her last book, “Green Tent,” was published in Russia last December. When an audience member asked her if she’s working on anything right now, Ulitskaya said, “Don’t scare me. I just published my book.”
Posted 6th April by Irina Shmeleva